The premise of soccer might seem simple as it just involves kicking the ball to reach the opposing team’s goal post and to score. However, the strategies used in doing so are quite limitless. Each player, team and leagues would be offering numerous possibilities in terms of strategies. By understanding the complexity of the game one would be able to appreciate the match.

While watching a game, you might want to pay particular attention to the diagonal runs behind the defense. The center forward would be making an angled run behind a defender. This would be a 10 yard sprint. When done at the right moment, the player would be able to receive the ball. Sometimes passes are made under pressure. At other times teams would be playing zone-defense or passing offensive player to a defender. 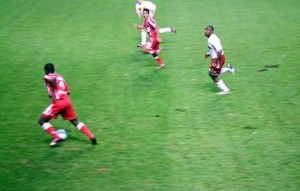 In some cases, when the game might be tight, a third man running would be able to open up the game. The midfielder or forward might be exchanging some passes on the side and the defender would come to rescue by breaking towards the goal in order to take the ball.

Quick give-and-goes, whether moving or static are able to open up the defense. Some players might be performing a wall-pass (a give and go) just for the sake of gaining more time on the ball if he is being chased. A player can also play the ball and then sprint at full speed to receive it. When the ball is kept moving, pressure is relieved and the space of the game opens up.